Many have asked me how I managed to find the time to read despite being busy working. Well, here are the how’s.

1. Working in an interior area has been an advantage for me as a reader as I get to spend more time reading. Where I’m posted, the local power generator will shut down for 4 – 8 hours during the day, depending on the amount of oil the power generator still has. So within those 4 -8 hours, especially during the weekends, I make use of this time to read just to let the time pass by. Instead of dreading on the fact that the power went out, I’d rather settle my mind on gaining new knowledge or  just let it swim around in the words of a novel. Other than the daily temporary power outage, the internet connection speed here is slow and at times becomes non-existent. So when it’s slow (or non-existent), I just decide to pick up a book and read. It almost has become involuntary.
2. I rarely watch TV. I have a TV but I rarely watch anything that is significant for me. I watch it just to rest my eyes from reading or when there is an interesting show that is coincidentally on when my housemates are watching. But no, I  don’t really have a favourite show to look forward to.
3. I’m a teacher during the day, and a reader during the night. During the weekdays, I only make my time to read during the night after I’ve finished eating dinner. Sometimes, I also read during the afternoon but usually I’d take a nap because of tired from work. So, night time is where the magic happens.
4. Motivation. As cliche as it sounds, we all need motivation to do something. But what’s a motivation for doing something without being aware of the benefits? Well, different people have different reasons as to why they read. For me personally, I just want to enrich my inner life as well as gaining knowledge and insights other than it being a form of escapism. Reading has become  a part of me. If I don’t read, I think I’ll have a reading withdrawal, except when I’m super busy. Besides, reading is a part of life-long learning process. It never stops.
2017 is coming an end. I’ve read a total of 41 books this year. Of course, I never set a reading goal as I prefer to have a flexible reading routine. I didn’t even think that I’d get to read this much number of books this year. I’m surprised at myself to be honest.
I’ve always hold this view when it comes to reading: It doesn’t matter how many books you’ve read, it doesn’t matter how slow or how fast you read, as long as you immerse yourself in the book and have gained a new understanding and have broadened your imagination, it will be an enriching inner life experience nonetheless.
Here is my 2017 reading list:
1.       Seminar Falsafah Malaysia III & IV (Mohammad Alinor abdul kadir & Farhan Nasir)
2.      Critical Views on Works by A. Samad Said (Sohaimi Abdul Aziz)
3.     Literature and feminism (Pam Morris)
4.     Teori dan Kritikan Sastera (Sohaimi Abdul Aziz)
5.       We are our brains (Dick Swaab)
6.  Confucius (Meher McArthur)
7.      Knowing the Difference: Feminist Perspectives in Epistemology
8.     Feminist Studies (Volume 40: No 1)
9.     The Cultural Revolution:A People’s History (Frank Dikotter)
10.   Education: Intellectual, Moral, and Physical (Herbert Spencer)
11.   Coffee: Philosophy for Everyone
12.   Nonsense: A Handbook of Logical Fallacies (Robert J. Gula)
13.   Bittersweet Harvest (Chan Ling Yap)
14.   The Myth of the Lazy Native (Syed Hussein Alatas)
15.   The political life of black communist: Claudia Jones (Carole Davies)
16.   The Communist Manifesto (Karl Marx)
17.   Simone De Beauvoir (Toril Moi)
18.   Gender Trends in Southeast Asia
19.   Intellectual Virtues (Robert C. Roberts & W. Jay Wood)
20.   Chomsky on Mis-Education (Naom Chomsky)
21.   The Intellectual (Steve Fuller)
22.   The School Revolution (Ron Paul)
23.   Persuasion (Jane Austen)
24.   Women and Gender in Islam (Leila Ahmed)
25.   Intelektual Masyarakat Membangun ( Syed Hussein Alatas)
26.   Moral Vision and Social Critique (Syed Hussein Alatas)
27.   Rasuah: Sifat, Sebab dan Fungsi (Syed Hussein Alatas)
28.   The Power (Naomi Alderman)
29.   Perempuan Politikus Melayu (Faisal Tehrani)
30.   Liberating the Malay Mind (M. Bakri Musa)
31.   Northanger Abbey (Jane Austen)
32.   Thank You For Arguing (Jay Heinrichs)
33.   Korea: The Impossible Country (Daniel Tudor)
34.   Korean Philosophy: It’s tradition and Modern transformation
35.   Women in Korean History (Lee Bae-Yong)
36.   A  Theory of Socialism and Capitalism (Hans-Hermann Hoppe)
37.   The Social Contract (Jean-Jacques Rousseau)
38.   The Bookshop Book (Jen Campbell)
39.   College Sex: Philosophy for Everyone (Michael Bruce & Robert M. Stewart)
40.   Profesor (Faisal Tehrani)
41.   Women who love too much (Robin Norwood)

I read mostly non-fiction. But I was an avid fiction reader before this. Perhaps I should read both genres alternately. 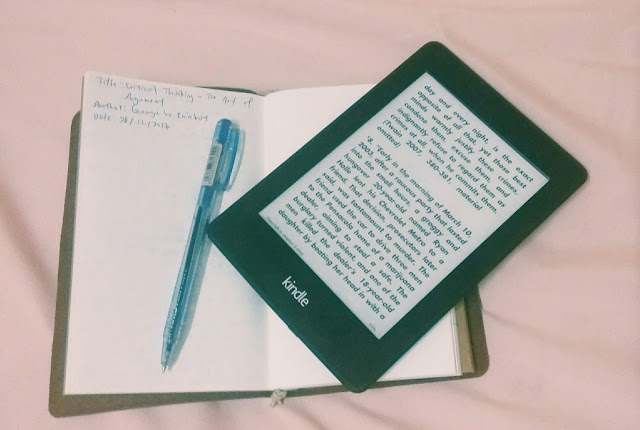