A message of inclusiveness in ‘Gol & Gincu 2’

Movie October 27, 2018
When I knew Sharifah Amani was going to star in ‘Gol and Gincu 2’, coming back as the role of the principal (Kak Jijie) of a safehouse for a group of girls whom society perceives as ‘troublemakers’, I know this movie has an important message to tell to society, especially to a conservative society like ours. After following her on Twitter and Instagram for years, I know that she is a Malaysian actress that does not easily accept roles that do not give any impact or a message to society. This is one of the reasons why I decided to watch the movie and indeed, it was worth it!
FYI, I know that it was released 13 years ago (in 2005), but I had never watched the first ‘Gol & Gincu’ movie. But this movie can be watched as a stand alone movie. This movie isn’t the sequel to the the first ‘Gol & Gincu’ as most people had hoped it would be. It’s the same ‘Gol & Gincu’ universe (hence the return of Sazzy Falak and Sharifah Amani), but it revolves around a different generation (social media generation) and a different group of girls.
Inclusiveness is perhaps the message of this movie. What is ‘inclusiveness’? It means ‘the quality of including all sections of society’. There are issues that concern society which are considered as taboo topics that ‘Gol & Gincu 2’ has presented. The first one is teen pregnancy. Hanis is the character who got pregnant out of wedlock. I like how the movie gives the character a sense of belonging when society often condemns and marginalizes pregnant teenage girls as immoral and a shame. ‘Rawat, Rehat, Remaja’ house a.k.a ‘Rumah 3R’ which is the name of the safehouse, provides a judgment-free space for such girls. Through Hanis’ character, the message of the movie is to not be quick to judge such individuals as they also have their own emotional and mental struggles.
Another taboo topic is about period and period pains. Our society is often silent about periods but this movie was very straightforward about it. It not only shows characters talking about periods (although it was only brief), it even shows women’s sanitary pads on screen. I think this movie has indirectly destigmatized the issue of periods and sanitary pads. Periods are natural phenomena and whipping out sanitary pads in public shouldn’t be a shameful act.
There was one scene where one of the characters saying that there could be more than 2 genders. I think this movie has directly acknowledged that gender can no longer be seen as a binary as it has been redefined following the emergence of a broad spectrum of gender identities adn expressions. Even so, it was only brief and it isn’t the one of the subthemes or subplots that’s been further explored in the movie.
Body positivity is another issue that is being expressed in the movie. ‘Gadang’ is a character that is overweight. But this movie shows that even an overweight person could walk on the runway and express him/herself fashionably as opposed to having only the typical tall and skinny people walking on the runway. Body positivity is about celebrating and embracing all body types.
Apart from being funny, I love how this movie sends a message of inclusiveness and delaying judgment towards individuals who don’t embody the ideal person who conforms to social expectations. I also love how this movie features special appearances by a few notable names in Malaysia. One of them is Marina Mahathir. 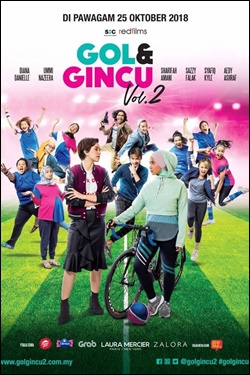