Education, Movie August 19, 2017
Just had the opportunity to watch ‘Aisyah, Biarkan Kami Bersaudara’ (which in English, translates to ‘Aisyah, Let us be brothers and sisters’) after a friend recommended the movie to me. It’s an Indonesian film which was released in 2016. Basically, the movie is about a Javanese Muslim female teacher who got posted to an interior area in a village called Dusun Derok in middle north east of Indonesia. The place is a predominantly Catholic area. Audience will see how this teacher interacts and imparts knowledge to the students as well as the people there and how she adapts herself to the local culture while still retaining her Islamic beliefs. Here, I’m going to analyse this movie in the aspect of ‘Education’.
Education – indoctrination of perceived truths or a system for seeking the truth?
Coincidentally when I was watching this, I was taking a break from reading Noam Chomsky’s book – ‘On MisEducation’. He argues that education can be used to indoctrinate the citizens and utilized by those in power to meet their own interests. What’s been indoctrinated are the ‘perceived truths’. They are the information or knowledge that those in power want you to believe and to question them would cause a stir between those in power and those who question them because it would get in the way of achieving their interests.
In the movie, there are no portrayal of political figures which would conventionally fit the description of ‘those in power’. However, Aisyah, who is the teacher, acts as an authority figure. She is the authority of knowledge. One of the knowledge she has imparted to her students was that she told them that although Indonesia has different races and religion, all of its citizens live in peace and harmony. This typically sounds like a utopian ideal for every country on Earth. But in reality, is it really? What Aisyah told them sounds innocent and not really much of an issue but isn’t it naive to think that there has been no struggle among the different races and religion at all? The movie depicted students that are from the interior area. They have no television and internet access. Therefore, they are less receptive to outside influence but will be accepting of what’s been told to them directly. With this ‘perceived truth’ that Aisyah had told them, it’s an example of indoctrination to that small community to let them think that Indonesia has never had conflicts even when they’re only implicit and subtle. I understand that the movie is promoting religious tolerance but to assume that a country is totally peaceful is to deny the political and religious struggle that have occured in the past and not be prepared for struggles that might occur in the upcoming future. Because as humans, we have our selfish interests and there are some of us who would go through great lengths to achieve those interests. Aisyah’s role as an agent of indoctrination isn’t that obvious as compared to the next character.
Apart from Aisyah, indoctrination is portrayed through Lordis’ father. He is also an authority figure. He has the responsibility to educate his children albeit through informal means. He is the father of the rebellious kid (Lordis) who did not go to school because he did not like the idea of having a teacher who was of a different religion than he was. His hatred toward Muslims was indoctrinated by the father. We can see this when Aisyah and her students went to visit Lordis but his father was the one who opened the door and started screaming at her. It was during that scene that it was revealed to us the reason and the cause behind Lordis’ prejudice and disapproval of Aisyah’s presence. They had the idea that she came to the village to burn their churches. They also had the idea that Christians are the enemies of Islam. What they have in their heads is only the negative images of Islam and this negative image has been spread by Lordis to his classmates before Aisyah came into the picture and rectified their misconception regarding the religion (Eg.: Islam is the religion of war). So, those are the ‘perceived truths’  indoctrinated by Lordis ‘ father and had Lordis himself believe about Aisyah and other Muslims. This act of hatred which was caused by Lordis and Lordis’ father’s indoctrination is apparent throughout the movie.
In portraying education as a system for seeking the truth, the movie does have scenes that portrays education in such a way. As this is a movie about a teacher, of course scenes that have students asking questions and the teacher having to answer them are shown. This act of asking questions is also an act of seeking the truth. In the movie, one of Aisyah’s students asks whether Muslims go to church or the mosque or both? Although the question might sound humorous to those who are already well aware of the fact that Muslims ritually go to the mosque, the curiosity of the student indicates a sense of wanting to search for the truth.
So far, this is my analysis of the movie in the aspect of ‘Education’ and how it can take in the form of indoctrination as well as system for searching the truth.
Personally, I thoroughly enjoyed the movie not only by analyzing it but also how my life as a teacher in an interior school resonated so much with Aisyah’s experience. I’m a minority in my school (a Christian teacher in a majority Muslim area) and Aisyah is also a minority (a Muslim teacher in a majority Catholic area) in hers. I sometimes face problems regarding water supply and she does too especially during the drought. I experience no mobile phone coverage and she does too, although hers was a bit extreme to the point that she had to go places just to get coverage while I only experience it on and off throughout the whole day. 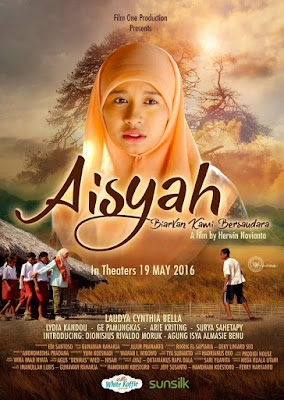