Big Brother (2018) : A criticism towards a failing education system

Education, Movie August 20, 2018
If you’re expecting that this would be a movie about the art of kung fu just because Donnie Yen is starring in it and you saw some fighting scenes in the trailer, you’d be left disappointed. However, if you’re expecting that this would be a movie about the relationship between a teacher and his students, then this movie will perhaps leave you inspired with tear-jerking reactions. Although the movie shows a cliche plot about a teacher and his students which progresses from disliking the teacher at first to finally loving the teacher toward the end after the teacher had done various efforts to gain the students’ trust, I can’t say that this would not happen in real life. Examples of movies about teacher-student relationship that have similar plot include ‘The Ron Clark Story’ (starring Matthew Perry) and ‘The Freedom Writers’ (starring Hilary Swank). However, these two movies were based on real people and real life events and ‘Big Brother’ was not. Even so, there are several issues in the movie that reflected real world concerns especially in the aspect of the education system in Hong Kong.
There were a few issues concerning education that I have identified in the movie. The most prevalent one is the exam-oriented teaching. In the movie, there was a scene where the female teacher was returning exam papers to the students and instructed them copy the answers 10 times as corrections. Copying 10 times of  the same thing is considered as a drilling method. In an education system that puts emphasis on  passing standardized tests, which in Hong Kong, it will be the DSE (Diploma of Secondary Education), teachers will bound to spend their teaching period to teaching to the tests. Pasi Sahlberg, the author of ‘Finnish Lessons’ have concluded that this method kills the fun of teaching and learning.
Another issue regarding the education system is that school performance is being measured by the students’ test results. Tak Chi Secondary School is a school that has the reputation for being a low performance school. When the school inspector came to the school, he said to the principal that if the school is not going to perform well, the school is going to be closed. In ‘Finnish Lessons’, Finland’s education system has done away with frequent school inspections and measuring school performance by students’ test results. In the movie, adhering to this education policy is shown by the principal. When the best student got injured in a fight, the principal was worried that the student would not be able to sit for the DSE and thus would not help increase the school’s performance. Such education policies treats schools like corporate companies. When there is competition among schools, only performance is being emphasized instead of giving the students a quality learning experience.
Hong Kong is known for its high suicide rates among school students. The pressure to perform well academically puts pressure on them. The movie also reflects and addresses a bit of this issue. Perhaps the system is the cause of these suicides.
Emphasizing on standardized tests and having the pressure for the school to perform well will inadvertently create a mindset among teachers to treat students like engines and robots and expecting them to produce the desired outcome that has been set by the education policy makers. One line from a character in the movie, Gladys, the tomboyish girl blurted out rhetorically saying ‘Are test results that important?’. This line from her struck a chord with me. Of course it’s not the only importance, but with the kind of education system that one is under, it seems to be the only thing that matters, be it from the perspective of teachers, parents, or education policy makers. Under such a system, teachers tend to overlook the core being of students, which is to realize that they are humans. The movie has Henry Chen (Donnie Yen) to make the audience see the background of these students as well as to see that there is hope in every individual students even if they’re the rebellious ones. They’re not machines, they have a life that influences the way they behave and act in class. Of course, this sort of movie plot is cliche but most cliche things tend to be true. This movie is perhaps a criticism towards Hong Kong’s education system which shares a few common features with other education systems around the world (Finland is an exception), including Malaysia.

Change the system, so that the teaching and learning culture will change along with it. 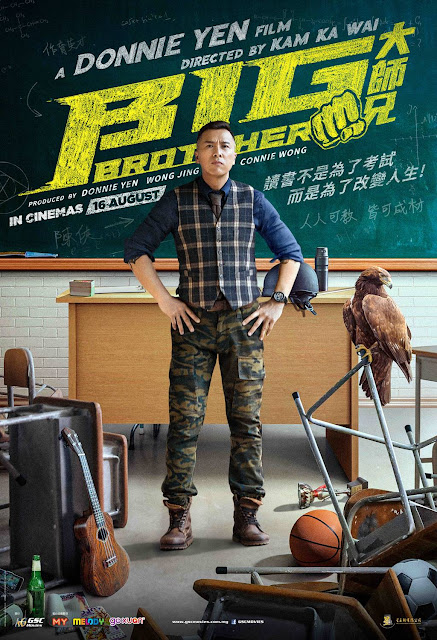 p/s: My rating for the movie is 4/5. Perhaps the issue of education could be reflected more broadly if the movie could show the background lives from the perspective of the best performing students as I believe every student has their own struggles, whether they’re performing academically well or not. Nonetheless, there were quiet a few scenes that left me in tears. If you are a teacher, I encourage you to watch this movie.
Related posts