Uncategorized September 24, 2011
Every Sabahan has their own accent. It depends on what ethnicity they belong to and which district they are from. For me, I lived somewhere near Penampang and my accent is the basic Sabahan accent that most people can understand. Even the Bajaus, when they speak Malay, their Malay accent differs from the Malay accent of the Kadazandusuns especially those who are from the interior. Their Sabahan accent is very thick.
After knowing that majority of my classmates in college are from peninsular Malaysia, I tend to not speak in a thick Sabahan accent and even changed the Sabahan slang ‘ndak’ to ‘tidak’ because I was afraid that they might not understand me. They were still getting used to the Sabahan culture, slang, accent, dialect and all things Sabahan. All they needed was time and adaptation.
But now, I don’t feel intimidated anymore because I can see that they can understand Sabahan dialect perfectly. I can use Sabahan dialect towards them anywhere and anytime… (though sometimes I might unconsciously spoke    a little bit of peninsular accent…and it’s always unintentional. It’s all due to adaptation because I hear the accent everyday in class. ) TEEHEE~! xD
I’ll be going to Selangor next year and I don’t think I’ll be changing my accent. There is no need to.
Below here is something I found in Facebook and it’s mostly true to me.
Let’s learn some basic Sabahan dialect:
you say ‘saaaaaanaa’ just to show how far that place is
you pout ur lips,and turn to the direction to show where things r …
you answer ‘ah?’ when people call your name
the word ‘bah’ can be used in almost all the situations..
you refer ur dad as ‘boss’ or ‘beliau’ (I don’t do this but generally most Sabahans do)
you refer the waiter at restaurant as ‘boss’ as well (Err..I never refer to them as ‘Boss’ but yes, most Sabahans do)
you were asked ‘are u Indonesian?’ by some outsiders when they heard u speak (Happened to our family during our trip to KL few years back. The taxi driver thought we were from Indonesia…LOL.)
you know what palis-palis means.
you like to sing (err…I like going for karaokes…heheh~ ^^”)
you can use ‘gia’ & ‘bah’ properly. (I seldom use the word ‘gia’ but I know how to use them)
if someone ask for help, u will reply with “Boleh bah kalau kau”
often used this word “ARAMAITIIii” during drinking session a.k.a moginum (but not me…haha!) 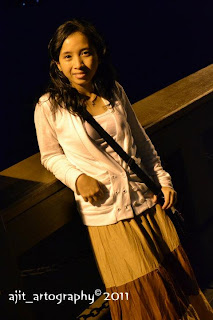