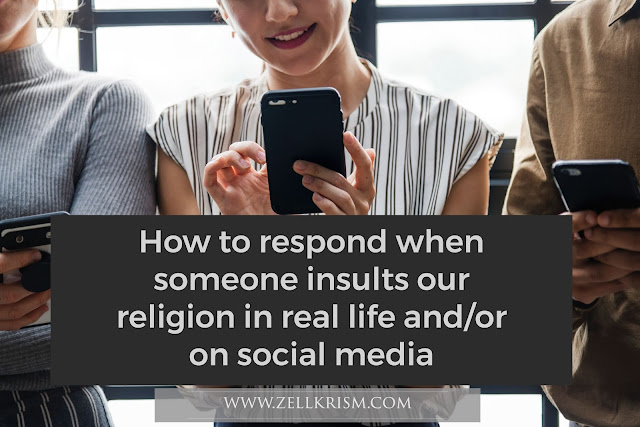 For some of us, religion serves as the foundation for us to use as a reference to how we live our lives and as a guide to our social conducts. Many of us have been conditioned into a religion since we were little and our perspectives and personal convictions tend to be strong when it comes to a particular religion.

When personal convictions are strong (due to socialization, education, etc), if someone insults our religion, or expressing statements that go against our beliefs, our first automatic reaction would be to get offended and then perhaps retaliation would follow. This is because there is a certain bias that we humans have when it comes to upholding a certain belief. We will react in such a way to defend what we believe dearly as it has become a part of ourselves and our identity. But we do not need to react in such a way. There are more productive ways for us respond and not to act as if we are undermining our intelligence.
In this world, according to adherent.com, there is an estimate of 4200 religion and spiritual traditions and that includes the 5 major religions in the world which are Christianity, Islam, Hinduism, Buddhism, and New Age Spirituality. With all these different religions, there is bound to be different philosophy, doctrines, and social conducts that serve as the basic make up for each of the religions. When some people who are not an adherent of a particular religion, without proper guidance from religious experts and certain aspects of knowledge about that particular religion, one will create baseless assumptions from which the perspective of the religion is entirely incorrect and a misconception. Opinions will form and they can come in the form of insults. There can be different ways as to how we should respond to insults on our beliefs that would yield more productive results instead of being offended and resorting to retaliation.
These insults can be direct and indirect. For direct insults, it happens live in real-time and they can be committed by a group of people or from the mouths of individuals. A way to respond to direct insults is we can provide an argument to rectify the misconception or baseless assumptions in a civilized manner. This kind of insult could be an opening of a dialogue or a debate. When it switches to this form, we need to first mentally detach ourselves from any personal convictions and suspend judgment. We often feel offended or retaliate because we fail to do this upon coming across with such a challenge. As for indirect insults, it could be expressed through a medium – books, television, or social media. To respond to this kind of insult, we can look it up through various relevant and reliable resources to confirm or disconfirm whether the assumptions are correct or not, or to first look for the roots of the misconceptions so that we can rectify it and later share with people whom may have come across with the insult.
Whether the insults are being thrown directly or indirectly, the first thing we need to do is to apply intellectual tenacity, In the face of challenges such as these, we need a willingness to embrace intellectual challenge and struggle.

Facing insults is indeed overwhelming, what more if it is directed at our religion, a belief system that we have been raised into believing of its validity and existence. However, we need to realize that there will be groups or individuals that will throw insults at our religion without proper research and understanding. As this often happens, it won’t be productive or rational of us to stop at being offended or resort to retaliation. A proper response would be to respond to them intellectually and objectively with hopes to persuade the other party to reconsider the correctness of their arguments or statements from the perspective of our religion as well as to have a mental effort of our own to investigate whether the assumptions are correct or not.