Politics July 18, 2019
Note: Some links in this post are affiliate links, which means I receive a commission if you make a purchase. 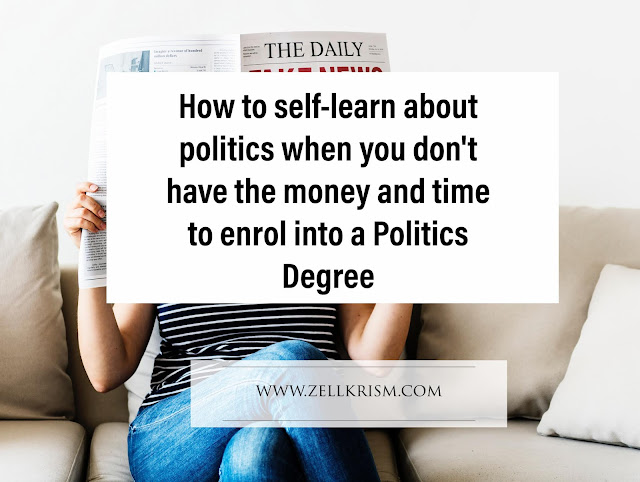 To be honest, if I could take a second Bachelor’s Degree or a Masters in another field other than education, I would take up political science. But due to time and financial constraints, it will only remain as a dream. However, I’m eager to learn and understand about politics. The following are the basic ways in which I have applied to become more politically aware and informed.

1. Realize the interconnectedness of politics and ourselves as individuals in a society/country

Among many factors, politics influence our lives. It has an impact on our well-being. The policies that have been made affects how we go about our daily lives. For example, you are someone who comes from a middle-class income family and it has been your dream to enrol in a public university. However, you couldn’t due to racial quotas. That is because government policies have influenced the enrolment of certain races to enter tertiary education. So from this example, do you see how something personal is related with politics?
2. Read up on books about political philosophy and political science.
Many might have thought to jump straight into reading the current news. But I think this second step should come before doing so.  I know that many may lament this sort of academic approach to it but politics isn’t just about what policies are being made out there or what scandals the politicians are up to. Reading these books will have you become aware of what principles underlie the facts and happenings of a political issue.

Here are the books that have served to build my foundation in understanding politics:

a) Political Philosophy: A Beginner’s Guide for Students and Politicans (Adam Smith)
Note: I chose to read this because it is in the reading list for PPE (Philosophy, Politics, and Economics) Degree for Oxford University students. I went through their reading list.

If you have a Kindle tablet or the Kindle app for smart phones, these below are the Kindle version:

3. Read the news (how obvious) everyday

Actually, you can read the news while learning about the foundations of politics. This way, you can judge the current happenings with the principles that underlie them. The most convenient way to do at this age of apps and smart phones is just by downloading the app of the news portal. Make sure that their reports are neutral. For local news (Malaysia), I always rely on ‘Free Malaysia Today’ to notify me of the latest news. As for international news, I rely on ‘The Wall Street Journal’. You don’t have to read ALL of them. Just the issues that interest you.

I would like to suggest you to check out the ‘Coursera’ app. It is the app that I use to take online courses for free! But if you want credentials, then you need to pay in order for you to get the certificate. I took ‘Moral Foundations of Politics’ which was conducted by Professor Shapiro from Yale University. You’ll see a video of him interacting with two students which they will go throught the moral foundations of politics one by one. Be sure to take down notes! It’s a learning process. The course also tests you on what you understand from the video lecture.

I put this in the last place because although there are people who are well-informed about politics out there, from my experience, there are many people who are not – at least around my social circle. However, try to give the benefit of the doubt and listen. If we’re not sure, be sure to investigate and do a little researching to verify what they’ve just said. Don’t simply take it in without questioning. Politics tend to be an emotionally charged issue so be aware that some may get offended. It is better that when we do discussions, give a neutral view. Go into an analyst mode and be non-partisan. That means, try to look at all sides – even if you disagree. Take this as a learning process as well.

If you have any other tips, please feel free to share.