Education, Movie September 3, 2017
It’s the most hyped up movie as of August 2017. It’s a Thai movie about a genius girl who designed a fool-proof cheating system and made profit out of it. It even got 100% rating on Rotten Tomatoes. The movie presents interesting issues such as class inequalities, institutionalised corruption, academic pressure, and how a genius uses his/her mind for unethical reasons.
Class inequalities is represented through the characters of Lynn, Bank, Pat, and Grace. Lynn, the daughter of a middle class income family whose father works as a teacher trying to make ends meet and pay her tuition fee after getting stripped off of her scholarship. Members of the lower class income society are represented through Bank and his mother who owns a small launderette to survive financially. Whereas for the upper class members of the society, it is represented through Pat and Grace. In the movie, both Pat and Grace are the students whose parents paid the school just so that they could enroll in it. This class inequality is what leads Lynn to make profit out of the students of the upper class background by helping them to cheat in a systematic fashion.
Even for a prestigious school, its corruption lies within the system of student enrollment. When we hear the word ‘prestigious’, of course our minds will be set on an image of a school filled with brilliant students, whom got selected based on a strict academic criteria for them to be qualified to enroll into a school that has such a reputation. However in this movie, surprisingly, for the characters of Pat and Grace, how they got into the school was through ‘extra payment’ provided by their parents. It’s evident throughout the whole movie that Pat and Grace as well as among the 10-20 other students who paid for the answers to cheat on the STIC examination, are students who are of low academic performance which shouldn’t qualify them to get accepted into a prestigious school in the first place.
In any educational institution, students will face academic pressure. It’s the norm. But it all depends on how the students deal with it. In this movie, students such as Pat and Grace, who got into the prestigious school through ‘extra payment’ but are of low academic performance, are indeed pressured to do well academically. These students do well in co-curricular activities but they are academically weak. In order for them to stay active in their respective co-curricular activities, they would need to do well in their studies. Hence, knowing how badly they would do in the exams, they have Lynn to provide them with all the answers which is the event that leads to all the conflicts that happened in the movie.
Now, let’s focus on the title. It has the word ‘genius’ in it. What constitutes someone being a genius in relation to ethics is an aspect that we can explore in this movie. The genius in this movie is Lynn. Not only that she’s a straight A student and has impressive memorizing skills, she is also a genius by creating a cheating system whereby she could get the students of low academic performance to pay her in exchange for giving them the answers to the school examinations. She is also the mastermind behind the STIC examination cheating scheme. What she did was indeed unethical but her genius mind had made her forget about ethics. Another genius in the movie is Bank, who was initially an academic competitor of Lynn but toward the end of the movie, he began to join Lynn and her comrades in their cheating scheme because coming from a poor socioeconomic background, the money gained through the scheme could help him pay for an overseas education. A shallow association toward a ‘genius’ would be that they won’t do anything unethical. Criminals are geniuses. Their genius minds lie in the way they plan their scheme without getting caught. Hence, the title ‘Bad Genius’.
I personally think that class inequality and academic pressure serve as the sources of all the things that entail throughout the movie. Without class inequality, institutionalised corruption wouldn’t happen. Other than that, without it, Lynn wouldn’t have had the idea to charge students who are of the upper class background to pay her in exchange for examination answers. Lastly, without academic pressure, Pat and Grace wouldn’t be forking out money just for the sake of getting the easy answers to the exam.
Moral of the story – don’t be lazy to do revisions and contribute our intelligence for an ethical cause. 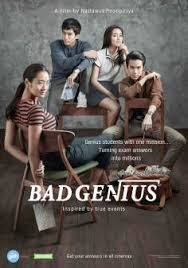