Social issues May 12, 2018
There I was, in the living room with my parents. Having our eyes set on the television at 12 a.m. on the 10th of May 2018. The number on the poll for Pakatan Harapan kept getting higher and higher. Surprisingly, Barisan Nasional was lagging behind. Fast forward to almost 4 a.m., Dr. Mahathir Mohamad, Malaysia’s former Prime Minister and the leader of the party, announced that Pakatan Harapan was claiming victory.
That announcement wasn’t just any announcement. It marked the end of Barisan’s Nasional’s 60 years of governing Malaysia! The coalition has been known as the longest continuing ruling coalition in the democratic world. So, since independence, a change of government has never happened in Malaysia…until now.
I voted for the first time in this election. What’s more amusing for me was that when I voted for the first time, suddenly, BAM! a change of government took place. Nobody expected this. Even myself. I think it’s because we were so used to Barisan Nasional being the only governing coalition in this country that people thought a change of government could never happen, ever. Well, I think we have underestimated the power of our own votes. To counter what has happened in the 2013’s general election, 2018 has proven that democracy in Malaysia is not dead. The people have seen how powerful their votes are and leaders are aware that the people can overthrow them anytime when their track record doesn’t seem convincing to the people.
According to statistics from news reports, young people (21 -39 years old) make up most of the voters for the 2018 general election which is 40% out of 82% of the registered voters that turned up. I call this ‘The Rise of Malaysian Millennials’. Anyone who was born from 1981 until 1996 and are aged 22 until 37 in 2018 is considered a Millennial. A new generation of voters have emerged. Millennials, known for a generation that utilizes and relies on social media for information have made themselves become more politically aware. The factors that could be contributing to this change could be because of the previous Prime Minister’s question of integrity and character, the rising cost of living, and limited job vancancies. I think young people are concerned of these factors which is why a sudden shift of government took place. I would like to share a quote by Patrick Murphy:
‘The political process does not end on Election Day. Young people need to stay involved in the process by continuing to pay attention to the conversation and holding their leaders accountable for the decisions they make.’
Functioning as a democracy, we the people are the actual bosses of the country. The leaders are here to serve us. The next election will be in 5 years. So, evaluate our leaders and the current ruling government starting from today and see how they perform. Change is always possible just like how change has happened in this country, even it took 6 decades.
But why did young people choose a 92-year-old to lead the country after his 15 years of resigning as Prime Minister in 2003? His rhetorics center on reformation. One of them is freedom of press and freedom of speech. This is the thing that appeals to me the most. To be specific, I’m looking forward to see what the movie industry will do. Perhaps the industry will be making a movie that criticizes local political figures (doesn’t matter whether they’re from the government or opposition). Since majority of the young people express their thoughts and opinions through social media, with this kind of reform, fear no longer lingers in their hearts and minds. I personally think that change is needed. Those who lived through his reign have said that he was a tyrannical dictator and an authoritarian. But then again, why do we want to look back? People change. He was the necessary evil to ward off the other evil. By comparing both of them, at least one of them decides to make amendments. So, isn’t reformation more important? He is the hope of the nation. But, we need to be reminded that he is not going to lead the country for that long due to his age.

Millennials, eventhough our votes were the key, the generation before us have contributed as well. Reformasi started in 1998, the first tsunami was in 2008. Don’t dismiss the momentum that created by those before us.

With all that being said, as a Millennial, I’m glad and proud that I’ve contributed to this change in Malaysia. I’m proud to have been a part of Malaysia’ unprecedented history and have lived through to see it happening. However, my evaluation of the current ruling government will forever be on-going. We shouldn’t be siding on the government at the expense of the nation’s well-being and development. The nation’s well-being and development should be our top priority and concern. 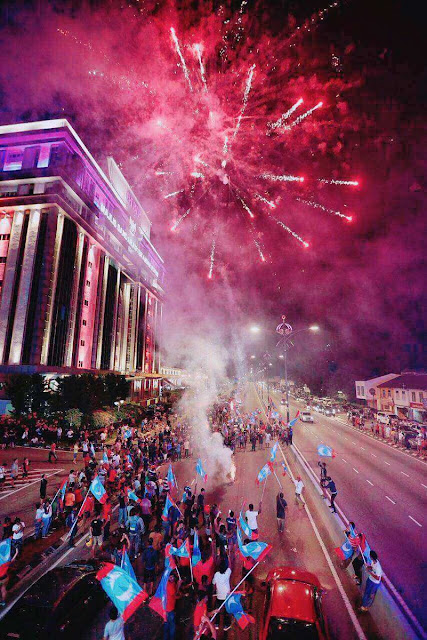