Reasons for the negative perceptions toward Korean Wave (Hallyu) in Malaysia 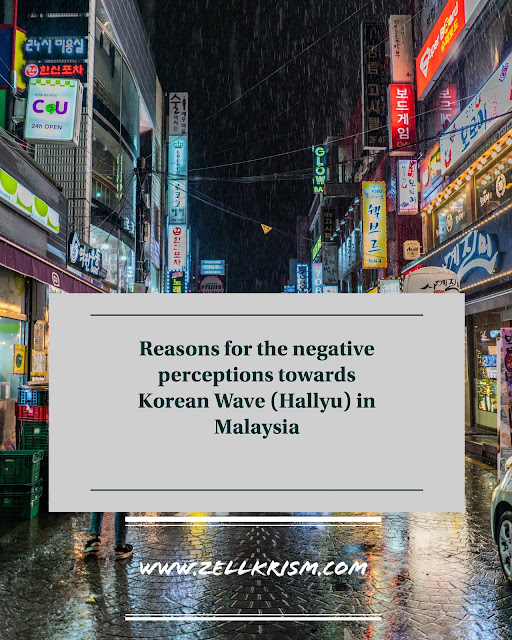 The Korean Wave has been a phenomenon for the past 5 to 10 years. Their products such as K-Drama, K-Pop, K-Beauty have been in the craze during this period of time and it is still  an ongoing phenomena. Being a country that is a part of the Asian region, K-Wave is quick to infiltrate into Malaysia resulting in a variety of perceptions. I remember Winter Sonata (K-Drama) and Super Junior (K-Pop) being the talk of the town with some of my classmates being avid fans of those two. Positive perceptions have resulted in Astro offering Korean entertainment channels that are catered to K-Drama fans. If there are positive perceptions, then there must be negative ones. In this essay, upon my curiosity to search for the reasons for the negative perceptions, I am going to elaborate on the reasons as to why these negative perceptions exist among Malaysians.

One of the negative perceptions has something to do with the accusation of Korean Wave being a new form of cultural imperialism (Ainslee, Lipura, and Lim, 2017). Having been conquered by Western powers for 3 centuries, they see Korean Wave as another foreign entity which attempts to colonialize South East Asia. Many of the participants in this research have the opinion that they did not want another foreign power to conquer their region. With this reasoning, the Korean Wave seems to resemble the Western cultural hegemony. Much of this imperialism develops into economic imperialism. People tend to support Korean products than their own locally manufactured products. The consumers become conscious of its effects on their own culture and economy, which creates a sense of threat and intimidation. Consumers of this region also see Korean culture as being more superior to that of other Asian cultures. Perhaps a strong sense of nationalism has resulted in this rejection of Korean Wave.
Although being in the same Asian region, Malaysia and South Korea are different in terms of social norms and values. These differences contribute to the rejection of Korean Wave (Ainslee et al, 2017). A study in South East Asia and a study of students of UNISEL in Malaysia (B., (n.d.) have indicated that sexual and gender norms seem to be the main concern for this clash of social norms and values. Exposures to such kind of values seem to be coming from scenes depicted in K-Drama and K-pop videos. Many of the scenes depict values that go against the teachings of Islam such as hugging and kissing in public as well as wearing tight and revealing clothes.
Rejection of Korean Wave is also due to the reconstruction of the notions of ‘masculinity’. In Malaysia, hegemonic masculinity is an ideal construct which indicates that there is a favoured way of being a man in society. The ideals are derived from the notions of power, strength, sexual prowess, and patriarchal positions. This is entwined closely with the majority Malay ethnicity and the dominant Islamic religion (Ainslee, 2017).  ‘Soft Masculinity’ can be described as ‘male images that are feminine based on Western standards’. The Korean Wave has indirectly promoted this alternative form of masculinity. This is depicted in the way that the men in K-Drama and K-Wave are physically being portrayed. Usually, the public image of male K-pop groups shows their facial features being enhanced by makeup, mainly with eyeliners and eyebrow liners as well as having hairless facial features. This construction of masculinity signifies a lack of aggressiveness and sexual dominance. Exposure to soft masculinity towards a society that is characterized by hegemonic masculinity will surely pose a challenge to the currently accepted construction of the notions of ‘masculinity’. To describe a manifestation of this rejection, I have heard those who are against K-pop will say that ‘K-pop idols are gay’. I think this sentence is not a reference to their sexual orientation but it refers to the kind of fashion that male K-pop idols tend to wear such as those I have already described above.
Some tend to reject Korean Wave because they notice that they promote the same plot of K-Drama and the same style of K-Pop (Ainslee et al, 2017). This indicates that consumers want variety and they perceive that Korean products (particularly K-Drama and K-pop music) do not serve such wants. Having been exposed to a variety of drama plots and genres as well as a variety of genres of music which have come from different countries, consumers are aware that K-Drama and K-Pop have little to offer in terms of variety as they have other choices that could cater to their interest. When there are choices and different cultural products to compare to, Hallyu seems to be static and formulaic.
I have discussed the reasons for the negative perceptions of Korean Wave in Malaysia based on several studies conducted in the country. These studies resonate with the perceptions of the individuals around me. In order to dig deeper into the issue, these studies have helped me to understand the underlying principles and conceptual frameworks that are related to such negative perceptions.
Citation:
M., B. (n.d.). KOREAN WAVE AS A MODEL CULTURE IN MALAYSIA. Retrieved from https://www.academia.edu/33350275/KOREAN_WAVE_AS_A_MODEL_CULTURE_IN_MALAYSIA
Ainslee, M. J. (2017). Korean Soft Masculinity vs. Malay hegemony: Malaysian masculinity and Hallyu fandom*. Korea Observer,48(3), autumn 2017, 609-638. Retrieved December 26, 2018, from https://www.academia.edu/34778290/Ainslie_M._J_2017_Korean_Soft_Masculinity_vs._Malay_hegemony_Malaysian_masculinity_and_Hallyu_fandom_KOREA_OBSERVER_Vol._48._No._3._Autumn_2017_pp.609-638.
Ainslee, M. J., Lipura, S. D., & Lim, J. B. (2017). UNDERSTANDING THE HALLYU BACKLASH IN SOUTHEAST ASIA A Case Study of Consumers in Thailand, Malaysia and Philippines. Kritika Kultura,28, 63-91. Retrieved December 25, 2018.
Related posts