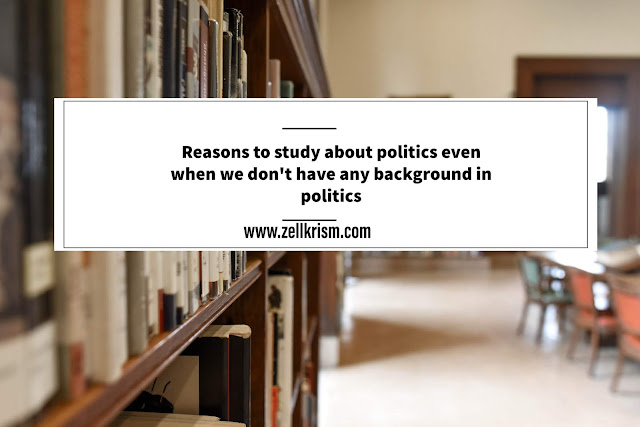 Ever since last year’s GE14, my interest in politics got heightened. I realize that our daily conversations tend to revolve around the nation’s current political affairs. I could jump into these conversatons and start voicing out my opinions. To keep up with the nation’s current political affairs, one needs to read the news everyday to be aware of what’s currently happening. While this is the most common way for one to learn about local politics, I feel that I needed to understand the underlying principles that make up our nation’s political structure.

To some of you who know me, many of you may think -‘You’re not a politician nor do you have an educational background in politics. Why are you so eager to learn more in-depth about politics? Why can’t you just focus on your career as a teacher?’ As a teacher, I’m under the management of the country’s education system which has its policies determined by politics. Without the current nation’s policy on education which has been highly infuenced by the current political state, the state of our education system wouldn’t be where it is today. For example, starting from this year, our current Malaysian Education Minister, Dr. Maszlee Malik has opened the enrolment to national schools for students who do not have a Malaysian identification card, provided that one of the student’s parents is a Malaysian citizen. So, the student’s fate is determined by governmental policies. The political ideology that underlies this effort is called ‘modern liberalism’. So, not only do we see that there is political influence that can be seen on the surface, but what makes a political decision to go into a certain direction is the principles that underlie it.
What I’m interested in is more towards the theories and philosophy that make up our political system. This allows me to be objective and not to take my personal convictions into account when analyzing the nation’s political affairs. I’m aware that there are limitations to this approach though. This approach won’t help me to make decisions on voting day because I did not include my personal values and convictions into the analysis. However, endeavouring into ‘studying politics’ does not mean I need to neglect ‘practicing politics’ as a citizen. I just need to know when and where it is appropriate for me to apply one and the other.
In terms of getting into conversations about politics, I would always want to provide my opinions but I do not want my arguments to be without substance, facts, and logic (a.k.a. being an empty can). I have read introductory books on politics because I firstly need to have a strong foundation before I could get a grasp on the more complex issues in politics. Below is a list of books that I’ve read which have helped me understand politics on a more deeper level:
1. Comtemporary Political Philosophy: An Introduction (Will Kymlicka)
2. Analyzing Politics: An introduction to political science (Ellen Grigsby)
3. Political Philosophy: A beginner’s guide. For students and politicians (Adam Swift)
4. Political Science: An introcution (Roskin, Cord, Medeiros, Jones)
5. Introduction to Political Psychology (Martha Cottam)
I may not be in politics nor do I have a background in politics, but it would be ignorant of me to provide my opinions on politics but not have not enough knowledge and undertanding about it.

p/s: I know that this won’t help me improve my teaching methods and knowledge in teaching but that is a whole different area in education.