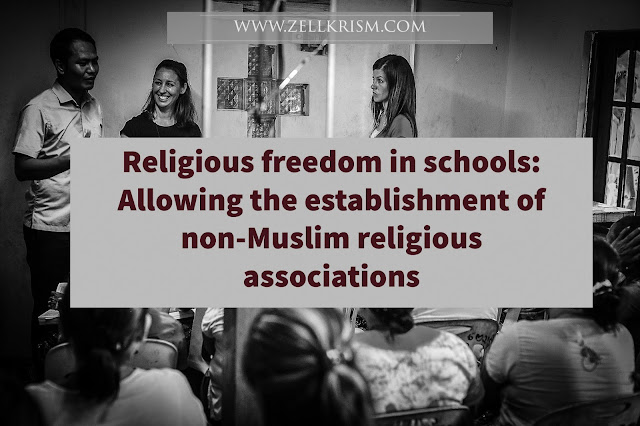 A teacher told me about how an association for Christian students in her school was banned by the school administration. The ban was due to the impression that there are already too many registered societies in the school itself. The teacher had also told me that there were a few Muslim teachers who complained about several Christian religious programs being conducted in the school. I would like to argue that this sort of ban is unconstitutional and it violates the concept of individual liberty.

Based on Malaysian constitution, Article 11 guarantees the freedom of religion. This means citizens have the right to profess and practice his religion. Article 11(3b) states that every religious group has the right to establish and maintain institutions for religious and charitable purposes. The establishment of a religious association in schools is a manifestation of this part of the constitution and it allows students to profess and practice their religion with members of the school. If a school bans or prohibits the establishment of non-Muslim religious societies in school, then it is unconstitutional as it seems that non-Muslims are not being given this freedom in an education setting.
The ban also violates the right the to individual liberty. Every adherent of a religion has made their own choice of what to believe and profess. It is a personal conviction that every adherent of a religion has made. This includes not only Muslims but Christians as well. Individual liberty in terms of religious freedom gives people the equal opportunity to profess any beliefs as long as they extend this freedom to others in order for them to profess a belief that are other than their own. Banning the establishment of non-Muslim societies in schools violates this freedom as only school societies that are related to Islam can be established but not non-Muslim ones.
There is a circular (click here to view – Surat Pekeliling Ikhtisas Bilangan 2 Tahun 2011) attached with the guideline regarding co-curricular management in schools for the establishment of non-Muslim religious associations in schools. Schools that want to establish non-Muslim religious associations in schools have to comply to the terms and conditions. The guideline states that the members of the society have to take into account the religious sensitivities in this country when planning religious activities. The society is also not allowed to proselytize their religious teachings to other students that are of other religions. Lastly, membership of the non-Muslim religious assocciations should only be granted to those who profess the same religion. The circular along with the guideline is a manifestation of religious freedom in which the Malaysian constitution has endorsed.
Schools should let students of other religions to profess and practice their beliefs. Muslim teachers and school heads must also understand the concept of freedom of religion so as to not impede non-Muslim students from professing their faith in schools. The reason is because Muslim students and non-Muslim students should have the equal opportunity to be a member of their own religious association. Non-Muslim teachers who have taken the initiative to establish non-Muslim religious association  in schools should also comply to the terms and conditions. This way, we’ll have a win-win situation whereby all religious groups can have their own place of gathering not only in religious places but also in an education setting.
Related posts