The practice of mindfulness among teachers 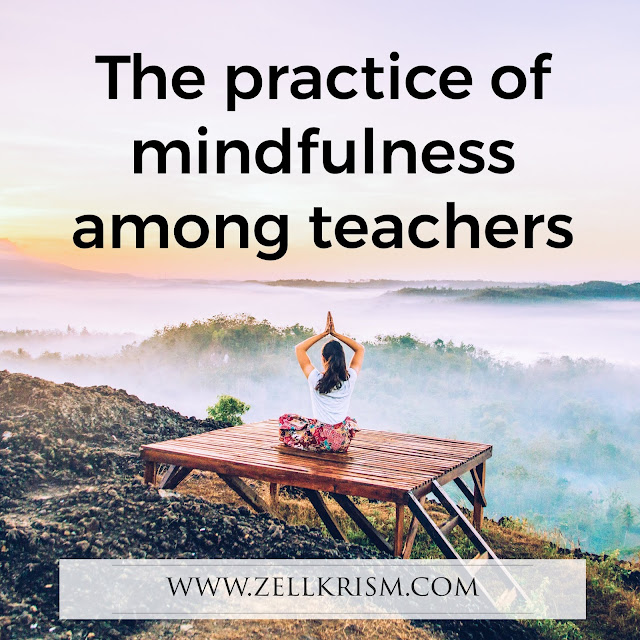 For the past few years, reports of teachers committing  suicide have surfaced in news media outlets. In 2016, a teacher in Klang was pressured by the headmistress with tonnes of workload and was on the brink of suicide. In 2017, a Putrajaya teacher attempted to commit suicide during class. In 2018, Berita Harian reported that a 36 year old teacher from Ipoh who was battling  with depression jumped from the 5th floor of a shopping mall. In January 2019, a teacher was reported to have gone missing and when she was found, it was found out that she was suffering from depression. This gives the impression that the teaching profession in Malaysia is a stressful job. Much of the stress is from the administrative workload. I’ve heard teachers expressed their concern over the ever growing workload that the Education Ministry has demanded them to do.

Lately in 2019, in line with the Education Ministry’s new aspirations, the government has taken the initiative to lessen the burden of the teachers’ workload. Several administrative work have been removed and are no longer under the responsibilities of the teachers. However, I still personally think that several of the removals are not enough. There are a few work that teachers still need to do and sometimes the demands of those who are higher up in the school administration are the ones adding up the workload. Some of us can’t do anything but to obey their demands. Most teachers will feel reluctant to take up the duty because most will have the fear of experiencing stress. I view this as outer chaos. But we can’t solely blame on outer chaos. We need to seek inner peace. This form of inner peace is what has been termed as ‘mindfulness’.
As of late, mindfulness in the Malaysian education sector has not become the mainstream approach to stress management. While in other countries such as Bhutan, Canada, and USA, there are programs (Meiklejohn et al, 2012) and government efforts (Albrecht, Cohen, Albrecht, 2012) to introduce the concept of mindfulness to educators in order for them to cope with stress.
Mindfulness is the act of experiencing and accepting the present moment as it is with bare and natural awareness and suspending judgment. It is not to say that we should accept and leave the undesirable and the unwanted situations as they are, but in order to change those unwanted things, we need to be mindful (be presently aware) when we are in the process of changing whatever situations that are considered as undesirable into our desirable goals. This is how physical time can go in parallel with psychological time. This is a form of informal mindfulness. Formal mindfulness is when you sit and close your eyes and feel bodily sensations without thinking of anything. A teacher’s inclination is that we often bring our minds (psychological time) into thinking that the work to have already been completed when in present moment (physical time), we’ve not even started. To apply mindfulness in doing our task, we bring our mind to the present moment, be aware of the process of each tasks and have our physical sensations (our eyes on the screen or a piece of paper, our fingers on the keyboard or holding a pen) and completing it in the process.
As for applying mindfulness in the classroom while teaching, the same principle applies. Apart from applying the methods above while teaching a lesson, according to Albrecht et. al (2012), mindfulness helps reduce the feeling of unpleasantness of interacting with a hostile student. As a teacher, our first emotional response to such students is to be angry or irritated. Through mindfullness, we are aware of the sensations such as anger or irritation as they arise. It shifts our anger towards calmness and responding to them with openness rather than defensiveness. We can deal with this student calmly even when what seems like they are jeopardizing our dignity. But it’s okay, with mindfulness, we see this as a process of guiding the students’ behaviour from an undesirable one to a desirable one. Mutual dignity, relationship building, and empathy can come as a result of practicing mindfulness in the classroom.
The benefits of practicing mindfulness have been supported by several research that have been conducted in the education sector. According to Abenovoli, Jennings, Greenberg, Harris, and Katz (2013), it fosters protective effects against burnout among teachers such as reduced emotional exhaustion and depersonalization as well as fostering educator’s resilience. Other than that, according to Franco, Manas, Cangas, Moreno, and Gallego (2010), mindfulness can also help decrease a teacher’s psychological  distress and medical  symptoms.
There has been a lack of focus in teacher’s academic education to include any psychological preparation or self-awareness tools (Franco et al., 2010) in order for the pre-service teachers to apply them when they have entered the real world of teaching. I think this is particularly true because all we have been taught was to be aware of students’ psychology and well-being but not ours. Hence, this leads to teachers not being aware of their mental wealth and well-being and not having the knowledge and sources to cope with their stress.
In conclusion, reducing the workload won’t be the absolute solution when a teacher’s mind is always in psychological time. We need to have our own internal mechanism in order for us to cope with stress. Stress (as a result of work or dealing with hostile students) is not to be avoided, as it is an indicator that what we want is to have a meaningful life. Stress can only be reduced, and it can be reduced through an approach called ‘mindfulness’.
References:
Abenovoli R., Jennings P., Greenberg M., Harris A., Katz D. (2013). The Protective Effects of Mindfulness against burnout among teachers. The Psychology of Education Review, 3, (2).
Albrecht N., Cohen M., & Albrecht P. (2012). Mindfully teaching in the Classroom: A  Literature Review. Australia Journal of Teacher Education, 37 , (12).
Franco C., Manas I., Cangas A., Moreno E., Gallego J. (2010). Reducing Teacher’s Psyhological Distress through a Mindfulness Training Program. The Spanish Journal of Psychology 2010, 13(2), 655-666.
Meiklejohn J. (2012). Integrating mindfulness training into K-12 Education: Fostering the Resilience of Teachers and Students. Mindfulness (2012) 3: 291 -307
Related posts