#Undi18: Challenges in implementing civic and voting awareness among Malaysian teens and youths 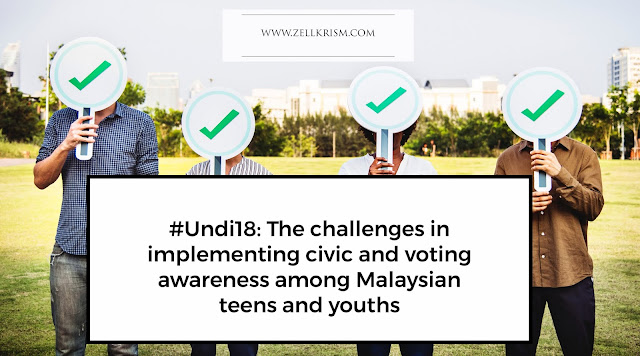 As of 2nd of July 2019, Syed Saddiq, the Malaysian youth and sports minister said that there has been a bipartisan support to lower down the voting age to 18. There are a lot of arguments surrounding this issue online. Well, it’s evident on Twitter. Just look for the #Undi18 and you’ll see a variety of supporting and opposing opinions. One of the common refutations for opposing the move to lower down the voting age to 18 is that lowering the voting age should come with the move to educate those who are below 18 about civic awareness and citizenship education. This is also in accordance with the press statement on 26th of July 2019 given by ERC (Electoral Reforms Committee) which stated that lowering down the voting age should be consistent with the efforts to empower civic and voting education among school students and youths in order to produce well-informed and responsible youths. While this is a logical step to prepare them for democratic participation, it will not be without its challenges regarding its implementation.

Those who are outside of the education field may have not known that previously there was a subject called ‘Civic and Citizenship Education’ (Pendidikan Sivik dan Kewarganegaraan – PSK) but many teachers have said that it is similar to Pendidikan Moral 2.0 (Moral Education) instead of placing a strong emphasis on informing the students’ rights as a citizen of Malaysia. Since 2017, this subject has been abolished but in December of 2018, Education Minister, Dr. Madzlee Malik stated that Civic Education will be reintroduced with an addition of several topics such as human rights, environmental awareness, integrity, and sex education (Isa, 2019). This was the result of his discussion with MACC (Malaysian Anti-Corruption Committee), Suruhanjaya Hak Asasi Malaysia (SUHAKAM) and environmental non-government organizations. As of late, it has not been confirmed whether the education ministry would proceed with this move. Based on the previous syllabus of PSK, there were 5 themes. The fifth theme would be the focus on Malaysia as a country with the title ‘Malaysia Negara Berdaulat’ (Malaysia, The Sovereign Country). This already implies that this subject has the objective to spread civic awareness and the students’ status as a Malaysian citizen. Since the PSK subject has been criticized as being another version of Pendidikan Moral, there should be a revamp on the subject contents. However, introducing such topics and teaching them in class do not necessarily translate into inculcating a spirit and substance of democracy that was emphasized. This is where the challenges of the implimentation come in.

The school seems to be one of the mediums for young people to learn about participation in democracy and many are advocating for it. However, let’s say that PSK is to be turned into a compulsory pass subject for SPM, one of the challenges is to be aware that even if PSK were to be made a compulsory subject to pass for SPM, as a dominant attribute of our education system, many of the teaching methods will rely on teaching-to-the-test which means that teachers will only teach the subject in order for the students to pass and students will only focus on passing the subject instead of the spirit of democracy being inculcated within the students. Just like any other subjects, they will see it as a matter that should only be dealt with during school years. They may have increased political knowledge, but not political interest which is reflected in a study of 15-16 year olds by John, Morris and Halpern (2003) in England. Examination papers may as well include questions that encourages critical thinking, but this is insufficient to stimulate the readiness to engage actively in civic, civil and political processes (Print, 2007).
Another challenge that should be anticipated and dealt with is regarding pre-service teacher preparation. To reflect back on how the previous PSK subject was implemented, most teachers were being given the subject to teach even when it is not what they majored in university. They had no proper training as to how PSK should be taught effectively and have it turned into a meaningful subject that would inculcate the spirit of democracy as well as political interest among the students. There were no degrees in education field in Malaysia that offer specifically for Civic and Citizenship Education. Well-educated and skillful professionals are needed in order to impart the knowledge and importance of PSK effectively. According to Hughes, Print, and Sears (2010), among the four countries that they have compared in their study that has the most significant teacher development is England. The government provides 200 placements annually at undergraduate teacher education programs throughout the country to prepare citizenship specialists. If civic education is to be consistent with the move to lower down the voting age to 18, then teachers must be well-equiped with the knowledge and teaching skills of the subject matter. This should start at the undergraduate level.
Providing adequate funding to the relevant institutions also poses as a challenge. Without funding, a program would not even reach a minimal level of success. Ranging from teacher education programs to curriculum development, funding is needed. If civic education is the primary element for those who are below 18 for them to gain interest in politics and develop political literacy, funding is needed for the implementation to be effective so that the subject will make an impact to prepare them with knowledge and readiness for democratic participation.
Personally, one of my main concerns when it comes to the content syllabus for Civic and Citizenship Education is what should be included in the syllabus so that there is a strong awareness for the students to realize that our daily lives and politics are inseparable and interrelated. It is not enough that we expose them to the concept of democracy but not expose them to countries that have democracy as their political system but in practice are actually authoritarian. The students must be made aware of what makes a state democratic and what does not, even if the country officially states that it adopts parliamentary democracy. This could be supplemented with classroom activities that use authentic sources such as written and audiovisual forms of news regarding the nation’s political affairs. To revamp the content syllabus, it could include a bit of political science and theories that should go together with activities that use the application of those theories to enable students to evaluate the current government policies and reflect whether those policies are in their essence democratic or not. The schooling system also must adopt an approach whereby the students could participate in a democratic process at the school level. That way, they will have an early exposure of how a democratic process takes place and they will see that any decisions and policies that have been made will have an impact on their well-being as an individual as well as as a member of an organization.

I personally welcome the call to lower down the voting age to 18 and educating students about democracy and inculcate political interest within themselves. However, the government, especially the Education Ministry should anticipate the challenges that arise from trying to implement civic and voting awareness among the youths. If effective steps are not being taken, then lowering down the voting age to 18 is nothing but an empty attempt at just going along with the world trend.
References:
Hughes, A. S., Print, M., & Sears, A. (2010). Curriculum capacity and citizenship education: A comparative analysis of four democracies. Compare: A Journal of Comparative and International Education,40(3), 293-309. doi:10.1080/03057920903395528
Isa, B. H. (2018, December 4). Mata pelajaran sivik diperkenalkan semula. Retrieved from http://www.utusan.com.my/berita/nasional/mata-pelajaran-sivik-diperkenalkan-semula-1.799065
Morris, Z. S., John, P., & Halpern, D. (2003). Compulsory citizenship for the disenfranchised: Benchmarking students, schools, and social and political attitudes before the Citizenship Order. Curriculum Journal,14(2), 181-199. doi:10.1080/09585170302828
Print, M. 2007. Citizenship education and youth participation in democracy. British Journal of Educational Studies 55:325-45
Motion to lower voting age is bipartisan – Syed Saddiq. (n.d.). Retrieved from http://bernama.com/en/general/news.php?id=1741397
Related posts