Why is it so hard to practice free speech? 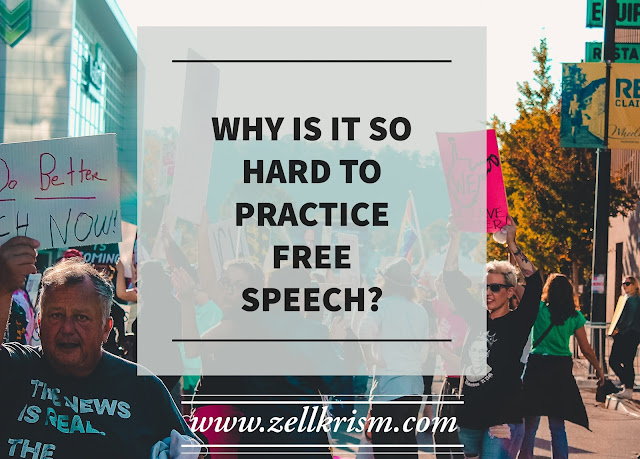 Last week I got into an online discourse with a random stranger on Twitter. My tweet was about free speech. I was criticising of how race, religion, and royalty are issues which are liable for punishment if they were being provoked by individuals. I contend that this is a violation of principles of free speech. As long as criticisms of those three do not involve threats or violence, it is still within the scope of free speech. As for the stranger, she was a proponent of getting the police involved which serves as a prevention of racial riots from happening. However, this approach in itself already criminalises free speech. Throughout the course of our exchanges of tweets, this question got me thinking – what makes an intellectual approach to criticisms and insults so hard to be practiced in our society? Why punitive approach is the easiest way to sweep sensitive issues under the rug?
The first reason is the lack of intellectual dispositions among the members of the society. As Syed Hussein Alatas had mentioned in his book ‘Intellectuals in Developing Societies’, the phenomena or characteristic that plagues our society is called ‘bebalisme’ or ‘Oblovoism’. It simply means the dispostion to not be inquisitive of the situations that are happening around us. It is a disposition that is equal to that of a parasite that affects the educated and non-educated groups alike (Alatas, 2009). It does not discriminate and sometimes intellectuals and professionals fall victim to this type of disposition. To relate ‘bebalisme’ with how one potentially reacts to criticism of their race and religion, most people would react in a way that when any form of criticisms is directed toward at any race or religion, one would immediately be offended instead of using their intellectual caacity to think. Being offended would be an initial reaction but what follows would be to get the police involved and reporting certain statements to the authorities. If we have a habit of doing research or getting into a civil discourse regarding certain statements, then reporting to the police wouldn’t be an option. The purpose of employing this apporach is not to be quiet when people insult our race or religion, but to offer a counter-arguement for the said insults and criticisms. This is how senstive issues such as these should be dealt with and it comes in the form of a dialectical process.
This might be a cliche but always a valid reasoning for us to look into the reason why intellectual disposition isn’t a dominant attribute of our society – education. Based on the previous education system, many of them are based on route learning and are exam oriented. It’s based off on taking in whatever the teacher delivers to you. The generation that underwent teacher-centered lessons, prior to shifting to student-centered lessons, lacked the opportunity to apply critical thinking skills and engage in facilitated problem-based learning which was the process of justification and validity of arguments as opposed to just the given reason themselves (Kompa, 2012). Teacher-centred learning often times do not employ an approach whereby an open enquiry is inserted in any stage of the learning process. This does not prompt the students to think for themselves as the opportunity to do so is scarce. Other than that, based on the current system, there isn’t a module in the school syllabus that addresses how the students should respond when sensitive topics casually get thrown at to the students. Teachers are also not allowed to ask sensitve questions in class because in our society,  it is an implicit social rule to respect other races and religions. While this is a noble cause, it does not prepare the students to face and respond intellectually to certain insults regarding race and relgion in the real world out there.
The third reason is the inability to detach oneself from the insults and criticisms that is directed at their racial and religious identity. We grew up with the racial and religious group that we have been conditioned with since little. When someone insults us, it felt like our whole existence has been violated. This becomes all the more complex when the race and religious group that we’ve identified with has been criticised. According to Merer (2017), ‘identification requires a feeling of attachment, it is instrinsically social.’ Group-level emotions are stronger than individual emotions because on experienes it as objectively true. Therefore, group-level emotion would usually trigger one to be upset because our identity and emotions are intertwined with one another so it’s difficult to divorce how we feel about what we identify with. Insults and criticisms are a form of negative evaluations and feelings of anger or resentment emerge upon the event where the racial or religious group has been criticised or insulted. This will mean that the group has been offended.
The reasons above could be the factors that cause an intellectual approach to insults and criticisms to be challenging. There needs to be a way for us to gain intellectual disposition and not become overly emotional when people criticise the racial or religious group that we belong to. These are the criterias needed for the practice of free speech.
References:
Alatas, S. H. (2009). Intelektual Masyarakat Membangun (2nd ed.). Kuala Lumpur,             Selangor: Dewan Bahasa Pustaka.
Kompa, J. (2014, February 20). Disadvantages of Teacher-Centered Learning.   Retrieved from https://joanakompa.com/2012/06/25/the-key-disadvantages-of-             teacher-centered-learning/
Mercer, J. (2014). Feeling like a state: social emotion and identity. International     Theory, 6(3), 515–535. doi: 10.1017/s1752971914000244
Related posts